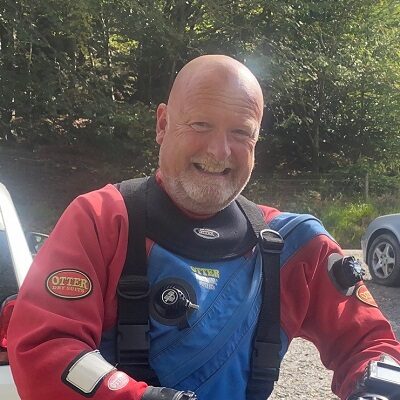 Andy began diving because of his son who at the age of 10 decided he wanted to learn how to scuba dive. That was 14 or so years ago. first as a PADI Open water diver and then with continued training and development onto Master instructor and IDC staff instructor assisting a number of Course directors around the country. He has mainly dived in the lovely cold water within the UK completing his open water at St Abbs, then on at other sites from Scotland to Cornwall at all the top areas.  He has also dived abroad in the USA and Caribbean to name but a few. He was lucky enough to be employed by the 2012 London Olympics authority as a diver. This was due to the reputation of underwater film and photography of the company in London where he taught scuba. They were approached to install and oversee the in-water cameras used to capture all the aquatic sports and organise a team of safety support divers, working around the clock to ensure uninterrupted footage was beamed to your TV. It was an amazing event to be part of and everyone involved took away a fantastic part of history. Among the obvious highlights of that event, was racking up deco time in the pool!! It was only 3m deep but he was under for 6 hours and taking Mr J P Getty for a try dive in the dive pool.

He now concentrates on SSI instruction for M.A.D. mainly on the rebreather side and as an assistant Instructor trainer and extended range instructor, teaching all ages all the way up to instructor, if you fancy a challenge give us a call.